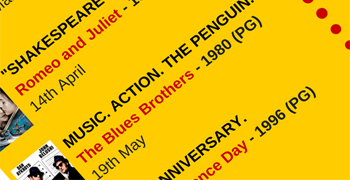 By the end of January Billericay Community Cinema will have completed 4 full months of operations.

This meant we needed a new Film Schedule …. and a lengthy discussion was held to agree what comes next.

Based on our experiences so far, the feedback we’ve had from guests, requests that @BillericayCine visitors have made – and taking into account a number of constraints (some films were too long, some weren’t available to show and we needed a mix of genres) we’re now pleased to release our schedule for February through to June. If you’re not sure whether a film is for you, why not take inspiration from one of our regular visitors who said “I’d never seen Hairspray, I had no idea what it was about, but I thought I’d give it a try. I loved it“.

This classic and much-loved romantic melodrama is a masterful tale of two men vying for the same woman’s affections in a love triangle. It is one of the most popular, magical (and flawless) films of all time – focused on the themes of lost love, honour and duty, self-sacrifice and romance within a chaotic world.

There’s a lovely line in another film “The Holiday” where Miles says “BA-BAM ! Two notes and you’ve got a villain”. I’d defy anyone not to recognise the music reference. Jaws was released in late December, 1975. Since most people won’t have seen it until 1976 we’ve gone with Jaws as a 40th Anniversary film

This year sees the commemoration of the 400th Anniversary William Shakespeare’s death. And what better way to remember the Bard of Avon than a showing of Romeo and Juliet. We’ve chosen the 1996 version staring Leonardo di Caprio and an unknown Clare Danes, now famous for her role in “Homeland”. Set in a hip suburb of Verona – a modern version of the play yet one which retains the original dialogue.

In 1980 the Blues Brothers hit the big screen. Full of fabulous music by some great stars, packed with humour and some of the most amazing car chases ever seen. So much happens in this film that each time I’ve seen it I’ve spotted something new. Music, fast action, humour – and @BillericayCine’s huge screen and big sound ! Perfect.

OK, we all know that America’s Independence Day is in July – but “Independence Day : Resurgence” is due in the cinemas later in June and we thought it would be fun to have a reminder of the original before you all traipse off to see the sequel.

We know Frozen has been shown once or twice … or more. But it’s also enjoyed by youngsters and we had to grab the opportunity to show it locally in Billericay. We’re aiming to have some special events – and of course dressing up. (We might even try to arrange a sound-proofed room for parents who might know the film just as well as the children !)

Although made in 1994, it still remains popular with many people having grown up with the film coming back to it. Lion cub Simba – a future King – searches for his identity. His eagerness to please others and his penchant for testing his boundaries sometimes gets him into trouble

A large inflatable robot called Baymax. Hero Hamada, a prodigy. Who knew the special bond that could develop between them. The city of San Fransokyo is hit by a devastating event – and Hiro, Baymax and friends Go Go Tomago, Wasbi, Honey Lemon and Fred become a band of high-tech heroes to uncover the mystery. “Big Hero 6” is born.

2015 saw the release of a new Cinderella movie. When her father unexpectedly passes away, the young Ella finds herself at the mercy of her cruel stepmother and scheming step-sisters. Never one to give up hope, Ella’s fortunes begins to change after meeting a dashing stranger.

Minions took the world by storm in 2015 when Stuart, Kevin and Bob were recruited by Scarlet Overkill, a super-villain who, along side her inventor husband Herb, hatches a plot to take over the world. What could possibly go wrong ?

I think the Billericay Community Cinema is a great idea. I would love to go to some of the screenings but unfortunately they are not subtitled. As I am deaf, subtitles are necessary for me to watch films and TV.

Would consideration be given to showing classic foreign films (with subtitles) in the future, or even silent movies? This would bring back memories of when I used to go & watch foreign films at the film club when at university.

Hi Ian – thanks very much for your comment. We’d actually love to show subtitled films but at the moment it’s proving difficult. We showed Slumdog Millionaire recently which had some subtitles – and we realised that because all of the seats are on the same level (as opposed to gradually rising as they would in a commercial cinema) only the first couple of rows had clear sight of them. I’m not sure how, in the short term, we can get around this unfortunately (as far as I’m aware we can’t change them so the subtitles appear at the top of the screen, which would be ideal) – but we will continue to look for a solution.

Silent movies are definitely on the agenda. We had a long debate about the makeup of the next few month’s offerings and decided to run with relatively mainstream / popular films as we continue to establish ourselves. We do, however, want to run something like a Buster Keaton evening.

One thing we definitely will have in either July or August is a showing of a 1916 propaganda movie “The Battle of the Somme”, commemorating the 100th Anniversary of the start of the battle. We’re running this in conjunction with Essex Libraries and the Imperial War Museum. The film documented the build up to the Battle of the Somme, the initial stages and some of the effects. Apparently it was seen by over 20 million people at the time. This is a silent film but has a recently composed and recorded orchestral accompaniment. I don’t know whether this will appeal or not.

I’m sorry that at present we can’t really offer a wider selection – but I hope this gives you some background !