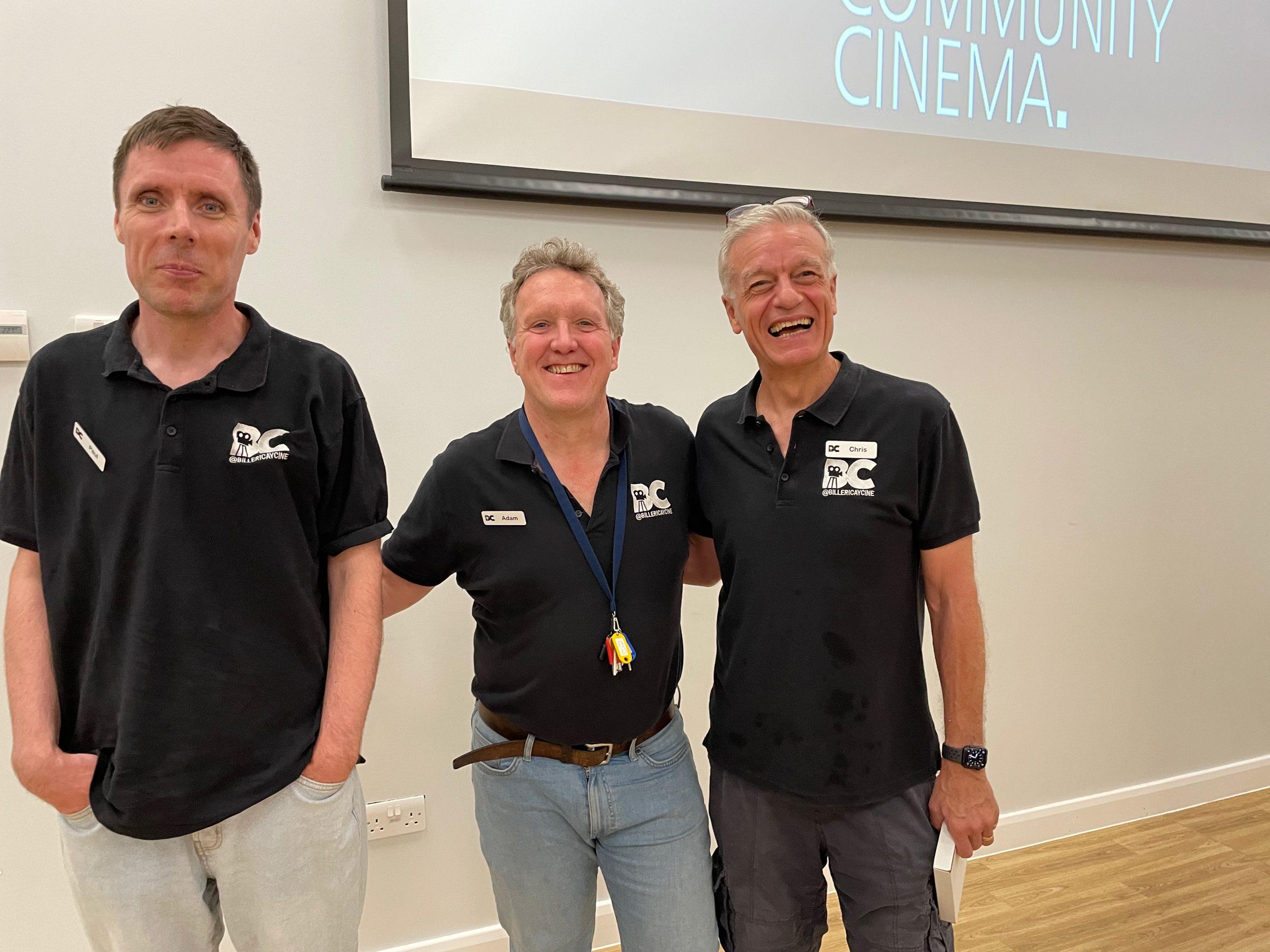 “Thank you to the amazing volunteers for making all this happen”

Well after that quote with the Volunteers, obviously! Congratulations to Paul Hayden (left) and Chris Holland (right) who, at Thursday’s screening of “Mrs Lowry and Son” at the Chantry Centre became the 17th and 18th members of the elusive “25 Club”.

Chris and Paul were presented with their high prized engraved glass coasters for volunteering at 25 films – which is a tally of around 112 hours of effort freely donated to support our community.

Their efforts, along with all our other Volunteers last night brought the total number of hours given by all Volunteers across all 126 films since we started in 2015 to just under 7,500.

Chris started as a customer before volunteering to play his sax, entertaining guests pre-show and then migrating to helping out throughout the shows whilst Paul started volunteering in 2018 on our Family Sunday shows. Huge congratulations – and our thanks – to both of them !

“Mrs Lowry and Son” is a very moving biopic about the challenging relationship between artist L.S.Lowry and his mother. There’s little more than its two accomplished stars on screen throughout – Vanessa Redgrave playing the very demanding, yet fascinating mother to Timothy Spall’s L.S.Lowry, a rent collector who through his painting wants nothing more than to please his mother. As the film ended it seamlessly moved to the modern day with a little segment showing Lowry in the museum dedicated to his life in Salford Quays. The show was busy. At 57 it was our biggest audience attendance since moving post-Covid to the Billericay Town Council “Chantry Centre”.

“The first time I have been on a Thursday. Great !!”

Regular volunteers Iris and Pat came along as guests to watch the film and thoroughly enjoyed themselves. “Wonderful interesting film. I visited the Lowry Exhibition in Salford Quays when I was on holiday. Thank you for the VIP treatment. Best wishes to you all“ said Iris.

Our audience included a number of first time visitors, a few library regulars who were joining us at the Chantry Centre for the first time and at least 1 Sunday customer who was making their first Thursday evening visit.

Feedback was very good – 93% of the audience handed in a feedback form (higher than usual !) with the film scoring a solid 9.6 and the evening as a whole 9.8.

A selection of the feedback quotes includes:

A favourite quote of the evening – because it encapsulates one of the key aims we had when setting up the cinema: to just try the films:

“Not a film I would have gone to see, but I did enjoy it – different and thought”

Well the “Long List” is growing ! We’ve already had quite a few requests from customers and Volunteers. Here’s what’s been suggested so far – some are specific films, others are genres or requests for specific actors. But there’s certainly quite a range!!! In the next couple of months we’ll work out what’s technically possible based on film length (2 hours 10 minutes being the maximum length that we show) and licensing (not always possible to get film licenses). Then we’ll group them (so that we guarantee different types of films across the year – for example a comedy, a drama) as well as provide a split across the Sunday and Thursday shows. This will become the Shortlist which will go out to voting.