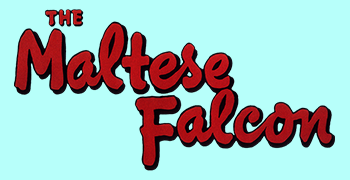 We kicked off the return from the summer break in style with Humphrey Bogart in one of his classic roles as Sam Spade in “The Maltese Falcon“, a film which Bogart himself said “It was practically a masterpiece. I don’t have many things I’m proud of but that’s one.”

Poor Carl, our committee member who looks after the trailers, had to deal with a pre-show panic as the day before our laptop had a major problem. This is the machine we use to show our adverts, play the background music before the film and our trailers. It looks like the machine needs major surgery, but fortunately we were able to borrow one on the day.

A huge thanks to our volunteers – new and regular. Without you these things simply aren’t possible. For those who aren’t aware, setting up the cinema not only means moving all the chairs and tables around the Library, but carting all of our equipment, refreshments and those very smart gold poles with red braid 3 floors down from the top of Burghstead Lodge and then back up again at the end of the evening. Who needs a gym membership when you get do 10,000 steps during the course of an evening !

Last night’s audience of 55 was a regular mix of people who had seen the film when they were young; others who had seen it on a TV screen and wanted the “big screen” experience and for some it was their first time.

Your feedback score gave the film an average 8.1 out of 10 which is one of the lower scores (1996 Romeo+Juliet 8.2, American in Paris (1951) 8.4). Although it wasn’t quite on the same level as “Citizen Kane” for being a “Marmite” film, there were a wide range of comments – ranging from “Incomprehensible plot” to “First time I’ve seen this nail biter from beginning to end” and “Really great choice of film“.

Our cafe/bar layout had to change slightly because the fabulous Billericay Art Trail is currently running with some fabulous art on display which meant that we were a little more cramped than usual but hopefully this didn’t cause too many delays in getting your refreshments.

We always love getting feedback – whatever it is ! Some lovely comments, but we also had some feedback on the wine “Lovely atmosphere as always. Any chance of Pinot for a chance instead of Chardonnay?“. Of course ! We will try to get some Pinot for next time !