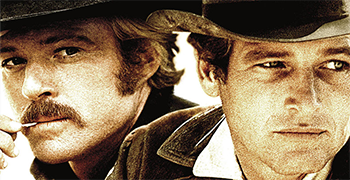 July’s presentation of “Butch Cassidy and the Sundance Kid” was memorable for a number of reasons. In the audience was our 2,000th customer (21 months after starting in September 2015 and after just 46 films!). And we had our first death – although all in the best interests of the film!

Above, our audience just before Sundance admits to his only weakness: he can’t swim! Sundance is looking at the edge of the cliff…..and you can just imagine what he is thinking!

Quite a few of our volunteers were dressed up as Wild West characters – with some of the costumery kindly lent by the Drama Department of Billericay School.

This swarthy looking chap is Pete “Mad Dog” Mitchelmore, our barkeep extraordinaire. Notice how even when asleep his pistol is kept very close !

We had traditional cowboy hats, we had bowler hats (as worn in Butch and Sundance in the film) and we had a card table (complete with whiskey) with a very serious game going on. We had a shootout after accusations of cheating – and we had a huge array of “Wanted” posters. Our volunteers are are a fiendishly devious bunch – wanted for such heinous crimes as goat rustlin’, selling whiskey to Indians, parking badly in Billericay, sock stealing, public drunkenness and selling tripe without a permit in Billericay.

Given the serious looking nature of the weaponry brought into the cinema, it was mandatory that all rifles were left at the door. Fortunately everyone obeyed, after all, this isn’t America. Oh… hang on …..

The card game got very fierce – especially once they’d worked out the rules of “Snap!” (seriously – this is not a joke. I wandered over as they were arguing how to play!!!!) which I guess didn’t quite match up in atmosphere to the more traditional poker game. But hey, we try.

In this shot 3 of our volunteers – Jo “Five Aces” Adshead, Debbie “Coyote” Butcher and Lord Terry “The Butcher” Butcher.

Shootout at the O.K … er Cinema ! Jo “Five Aces” Adshead was accused of cheatin’ by Debbie “Coyote” Butcher. Five Aces was faster on the draw……so we saw the sad demise of the Coyote !

Arrayed around the saloon were a series of “Wanted” posters – all a wonderful A3 size which was really effective. We had some great comments from our guests, who learnt a lot about the people who normally serve them tea and biscuits!

Our thanks as usual to Season Sponsor, Aspen Home Improvements for their support.