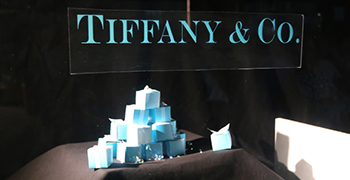 Breakfast at Tiffany’s was easily our most ambitious showing yet. Selling tickets was the easiest task we’ve had; they literally flew off the shelves – definitely a film people wanted to see on the big screen but tonight was definitely a “more than just a cinema” evening.

We had a visitor during the setup phase – Lindsay Alexander from the BFI’s Neighbourhood Cinema team. The BFI are visiting a number of community cinemas – and ours is one they are going to feature in their magazine.

Setup took time because we had some amazing props. A “Tiffany and Co.” branded window – with homemade Tiffany jewellery boxes on display; a painting of Audrey Hepburn in her classic pose; a drawing of “Cat” – and a stall run by one of our stalwart volunteers selling home made jewellery. That’s in addition to the normal bar, refreshment stall, setting up 65 chairs, moving the books, putting up the blackout blinds and of course setting up the screen, projector and audio.

The evening began with Simon Houlton providing the pre-film entertainment. Simon has an incredible singing voice – and his rendition of “Moon river” was beautiful.

Guests checked into the venue and immediately began eyeing up our cocktails – we had trouble keeping up with demand, having to get additional supplies at least twice !

After our usual house notices Andrew Schrader came to the podium to talk about the film. Andrew, a local Borough Councillor and self-confessed film geek has been a great supporter of our cinema since we started and has provided a pre-film talk on a number of occasions.

Planning the interval can take a little time. You need to find a point roughly mid-way through the film – but one which has a bit of drama to it, perhaps leaving the audience hanging. For Tiffany’s it just so happened that the interval came at one of the at the most logical points we’ve ever had in our showings.

But rather than head to the bar, our audience were in for a surprise. Another clip of video started, the sound of the “This is Your Life” theme tune came out over the speakers and the Billericay Town Council Chairman, Jim Devlin strode to the front of the cinema, red book clutched tightly in hand.

Jim was there to announce the 2017 “Billericay Citizen of the Year” which was being awarded to Carl Roberts, one of our Committee members and someone who has done much to support volunteer groups in the area.

Carl (and the audience, and in fact all but 2 of the people present) were completely surprised by this – and the look on his face was a joy to see.

It was a lovely evening – a packed house, a real buzz in the air and a very special time. A huge thanks to all of our volunteers who helped make the evening so successful.

“Super film, super evening and excellent extras-the Tiffany display, the singer and the refreshments. Such a lot of hard work must go into these evenings. Thank you”

To see some of the photos, head off to our Gallery – there are pictures of our very own Holly Golightly, the beautiful Tiffany window – and Carl being presented with his award.