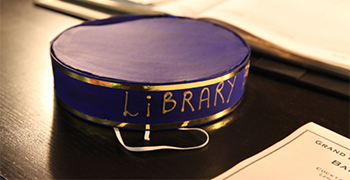 It was our most ambitious show to date in terms of the “immersive” elements. Instead of people walking past our catering stall as they entered the cinema, we featured our own version of the lobby of The Grand Budapest Hotel.

“I walked in and I didn’t know where I was” said one lady as we greeted her.

Coming through the doors guests were welcomed to the hotel, asked if they had any luggage that needed attending to, and were then directed down a red carpet, lined on each side by our gold posts and red braid to the check in desk.

Here they were greeted, not by the Lobby Boy, but by the Library Boy resplendent in her uniform and custom made hat.

Anne did an amazing job as the Library Boy – staying in character throughout as she welcomed people to the hotel explaining that throughout the evening we’d be operating a “waitress service” for refreshments. In the background we were playing some lovely Haydn String Quartets – and in keeping with the evening the recording was by the Kodaly Quartet who were formed in 1965 ….. in Budapest.

The Hotel Reception had been decked out with appropriate lighting, the amazing pigeon holes for letters and keys stood behind her, the evening’s drinks menu ready for collection and, standing proudly on each side of the desk how could we not display our two award certificates from the Film Society of the Year Awards!

Of the drinks, the Lemon Vodka Twist was especially popular, but as usual the Billericay Brewery beers sold well !

All of the key players in the team wore their hotel hats – from our waiters and waitresses through to Carol, our cashier.

The evening commenced with something very different (for us!). Local tale spinner, Carl Merry, had kindly agreed to tell a story. He’d learnt a new one, especially for the occasion and proceeded to entertain everyone with an enthralling tale.

And with that, the film commenced – but we had another little surprise for our audience towards the end of the interval when everyone was handed a little Mendl box, complete with freshly baked biscuit which provoked some lovely reactions !

With an audience of 33 we were slightly down on our anticipated 38 – however, it seems that our local train service was to blame with many people failing to get home from work on time that night.

Feedback from the evening was wonderful. The audience rated the film  9.4 (out of 10). The vast majority rated it very highly but we had one score of 6 and one of 3. To be fair, it is a somewhat quirky film and perhaps the level of swearing at times won’t suit everyone.

As for the rating of what we call the @BillericayCine Experience, the average was our highest yet – an incredible 9.9; a credit to the effort from all of our volunteers. This is the sort of evening that makes a Community Cinema stand out – and really differentiates us from the multiplexes. Although every member of the team makes a huge contribution to the success of our community cinema, I do have to highlight the efforts this time of Shona, Debbie, Jo and Terry who dressed the set so amazingly.

One final comment. One of the best ways we’ve found for marketing ourselves isn’t leaflets, posters, or our own posts on social media; it’s word of mouth. We know that those times we create a buzz, whether it be in a Film Thursday show or our Family Sunday viewing, people will go home and talk to their friends and relatives about us.

And so it was lovely to read a comment from Marla M. this morning on a local Facebook discussion board :

“Spent a fantastic evening @BillericayCine at the Library. We didn’t know what to expect but we were in for such a surprise. The Cine group and helpers were dressed up as lobby boys, with a red carpet and hotel reception, cocktails, popcorn and even little favours at the end. A fantastic attention to detail, the entire scenario was adapted to match the quirky and eccentric movie. We will return, can’t wait actually. Highly recommended

Thank you, Marla – we can’t wait to see you back !