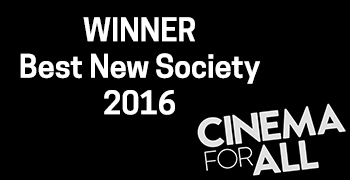 Organised by Cinema For All who help develop and support community cinema, this award is for community cinemas and film societies which have been in existence for less than 2 years. It was won despite very stiff competition from across the UK, from Glasgow to Hampshire by way of Nottingham and Billericay.

Billericay Community Cinema also won a Distinction in the “Best Marketing & Publicity” category for their creative use with limited resources of social media, printed media and their website competing against well-established groups.

The group were presented their award by Danny Leigh, writer, broadcaster and co-host of the BBC1 Film Programme.

What are the awards?

The awards showcase the very best of Community Cinema recognising the hard work of volunteers who bring film to communities across the length and breadth of the UK.

Deborah Parker, Chief Executive, CinemaForAll said : “Billericay Community Cinema sprang up just over a year ago, and has very quickly become a key part of the community, whilst ensuring healthy box office returns and great volunteer support. It’s all about the atmosphere for this group, who have put so much effort into making their cinema a social event for all the family. They describe their own biggest achievement as being the special environment they create – beanbags for the kids to sit on, colouring books and craft work and those all-important friendly greetings. We’re excited to award Best New Society to a shining example of what makes the community cinema experience so different to the multiplexes.”

Adam Adshead, Chairman, Billericay Community Cinema said : “This is a wonderful culmination of an incredible first year. To be recognised by our peers and to receive a national award is a huge honour. I’m so proud of everyone on the team who volunteers their time and effort so willingly. They are true Champions of our community. This group of people, and the many other groups of volunteers in Billericay who give so much epitomise what true community spirit is all about and make our town such a wonderful place to live”

What is Billericay Community Cinema?

How can people find out more ?