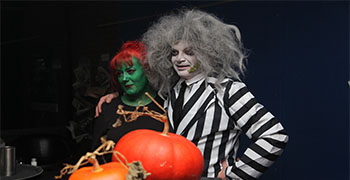 It has been a very busy month for Billericay Community Cinema. Three films – and a training session.

October 13th saw our combined First Birthday and Halloween showing of “Beetlejuice“. Possibly our most “immersive” show yet it featured a speaker (Andrew Schrader, returning for his second visit) talking about the film, volunteers dressing in character, gravestones, smoke, cocktails and headless bodies – oh, and “Bert” with his shrunken head sitting in the audience. We welcomed our 1,000th customer who won a Golden Ticket entitling them to see every film for the next year, free of charge.

10 days later we had our second showing of the 1916 propaganda/documentary “The Battle of the Somme” before an audience of 60 people. With the Brentwood Orchestra of Youth Musicians playing beforehand, another speaker talking about the making of the film (me …. and as far as I could tell no one fell asleep !), the Billericay Branch of the Royal British Legion as Guest Charity it was a wonderful afternoon – and with £163 donated to the RBL’s Poppy Appeal a very successful one too.

Then on the 30th we held a training session for volunteer projectionists, explaining how to set up our 3.5 metre
screen, cable up our projector, Blu-ray, amp and sound system – after which we then set up for our Family Sunday Halloween film “Hotel Transylvania“.

With an audience of 50, including many beautifully dressed youngsters who arrived in a variety of Halloween costumes, greeted by a red carpet welcome with spooky refreshment stall, face painting, arts & crafts it was a lovely afternoon.

Drawing a number from a hat a lucky group was awarded another Golden Ticket to celebrate our first birthday – this time for a family ticket to every Family Sunday for a year.

It’s been a busy month – but there’s no rest as we’re in the final stages of planning for our November films (the amazing “Grand Budapest Hotel” and “The Good Dinosaur” whilst feverish activity is underway preparing for our Christmas films – “Holiday Inn” and “Arthur Christmas”. Can’t wait !

Below – Bert got quite a few strange looks as he was chauffeured along the High Street to make his appearance at the cinema !