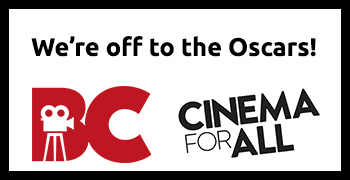 Billericay Community Cinema are honoured to have been shortlisted in two categories in the Film Society of the Year Awards, 2016 – and we’ve been told that the number and quality of entries this year has been especially high and that it is a considerable achievement to have made it onto the shortlist of 6 in each category..

This prestigious event to be held in November is run by CinemaForAll (the British Federation of Film Societies) and is effectively “the Oscars” for Community Cinemas and Film Societies.

Our shortlisted categories are “Best Marketing and Publicity” and the important “Best New Society”. In putting them together, it really made us realise just what has been achieved over the past year.

It’s especially pleasing to receive this news as our first full year of operation draws to a close. From May 2015 when the idea first formed, through October 2015 when we formally launched to next month when we combine our first birthday with our Halloween shows we’ve had an amazing year. We’ve shown 24 films to almost 1,000 people of all ages and interests and have been able to run a show specifically for the children and parents of local charity BOSP in conjunction with the Billericay Lions. We’ve been proud to bring a little bit of Hollywood to our High Street.

We’ve received many wonderful comments throughout the year but if we had to pick one it would be this from a parent of one of the BOSP children :

“Thank you for changing my mind that a cinema trip really IS possible with a special needs child”.

As we rapidly approach our First Birthday (which we will be celebrating with Beetlejuice and Hotel Transylvania) we’d like to thank everyone who has come to our shows and supported us.

We’d especially like to thank our very enthusiastic and hardworking team of volunteers – without whom NONE of this would be possible.