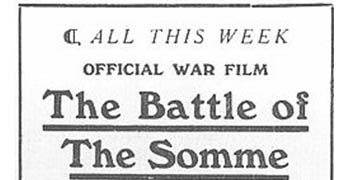 Gosh! What an evening!

As people came into the Library, they were welcomed by the wonderful music provided by talented young men and women from the Jazz group and the Classical Quartet of the Brentwood Orchestras of Youth Musicians. We had quite a few very positive comments from people – and we know that live music is a popular addition to our shows.

Guest Charity the Billericay Branch of the Royal British Legion hosted a stall – and turned out in force to watch the film which was introduced by a talk from Dermot McCarthy who spoke – virtually without notes – for 30 minutes. Dermot gave us a fascinating insight into the social context of the Battle of the Somme and the impact of the 1916 film – as well as a reminder that this year sees the centenary of the downing of Zeppelin L32 just off Greens Farm Lane. We discovered this amazing bit of footage of the crash and the huge numbers of visitors who came down from London to view the site. You can watch this 2 minute video here.

After a brief interval a short video produced by Carl Roberts, one of the @BillericayCine team. Featuring John McCrae’s famous World War I poem “In Flanders Fields” Carl has overlaid imagery from the film, the battlefields and the Thiepval Memorial. It really is a moving tribute.

And so it was on to the film itself. Digitally remastered – each of the 80,000 frames had been photographed and cleaned up – and with a specially composed sound track we all sat enthralled. I was amazed at the quality of the imagery and for the first time managed to sit through the entire film (usually most of the volunteers are restocking the refreshments, washing up or tidying!).

The sound track fitted perfectly really emphasising the drama and our new surround sound (courtesy a grant from Basildon Borough Council) really came into its own.

We normally stock Billericay Dickie and Billericay Blonde from The Billericay Brewing Company but we were fortunate to be able to add a couple of cases of their new “Zeppelin” ale – brewed to commemorate the anniversary of the zeppelin crash. The speed at which the Zeppelin bottles disappeared was incredible !

What was great about last night is that word about Billericay Community Cinema is spreading. Our audience was a mix of a number of our “regulars” but also some new faces – so hopefully we’ll see them back again at a future show.