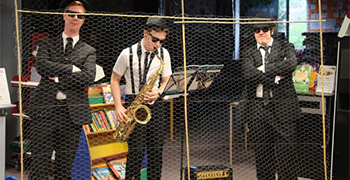 Thursday 18th May, 2016. It’s time for The Blues Brothers at Billericay Community Cinema.

To kick off the evening young Billericay local, Adam Holdsworth performed live behind the chicken wire in Bob’s Country Bunker. Adam played a selection of music from the show which got everybody in the mood. He was even joined by Jake and Elwood (allegedly!) during one of the numbers. Adam’s website is adamholdsworth.com – you can find more details about him there as well as some video of him playing at our Blues Brothers show.

Our Guest Community Group – the New Crawdaddy Blues Club  had a stall. It was great to meet them – and a really fortunate coincidence that we managed to tie them in with the Blues Brothers. This amazing not-for-profit club which provides live music every Friday evening will hopefully have picked up a few new devotees.

We even had a special intro announcement sequence for our audience which seemed to go down well. You can find it on YouTube here

Whilst all this was going on, our resident bar tender, Slipper Pete supported by Billy were hard at work at the bar which featured cocktails from the Orange Whip Appreciation Society. Other than the (obvious!) Orange Whip, they were also serving Royal Blues and rum and coke – alongside our ever popular beers from the Billericay Brewing Company.

The surround sound worked better than we had imagined for an older film : in the tunnel scene towards the end, the droplets of water were very audible from the back of the room and some of the sequences involving gunshots had people looking around!

Recently we started a feedback system where we ask people to rate the film. The Blues Brothers proved amazingly popular. Of the 47 forms received, the average score was a very high 9.5 and the comments received all very positive :

“Absolutely brilliant”
“More live music before films please, love it!”
“Great movie, great evening!”
“Would so love to see Rocky Horror show. This it would be great to see people dressed up! Also Mamma Mia”
“Keep going BC, you are doing a great job!”
“We’ll be back”
“Very good”