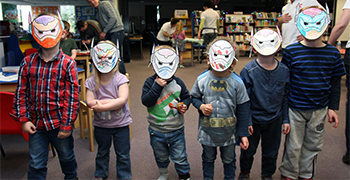 Sixty heroes small and not so small gathered on Sunday 24th April to watch the thrilling “Big Hero 6”. The doors opened at 2:30pm and in came groups of excited youngsters.

Munching their way through popcorn, our guests quickly got involved in some of the activities laid on: there was colouring in pictures of their favourite Hero from the movie; there were some fab Big Hero 6 tattoos expertly applied by our volunteers and some even made their own Baymax mask. We note, however, that this activity was not just restricted to our smaller heroes; some of the adults took part as well with some great results!

It was also the first outing for our brand new audio upgrade : Dolby Digital Surround Sound. Thanks to a grant from Basildon Borough Council we’ve been able to add a new Denon AVR-X3200W amplifier and two passive speakers at the rear of the cinema. Our technical experts, Carl, Frank and Pete had arrived early armed with boxes, cables and various tools to set up and test.

In Big Hero 6 the effects were noticeable and feedback from our audience was positive – effects such as Baymax flying across the screen were mirrored by the sound travelling from the rear left of the cinema across the audience to the front right. When Baymax called out from behind off screen a few people turned! Awesome result!

Everything went very smoothly with the new equipment – though we’ve a little “tweaking” to do to make the laptop (which hosts the on screen adverts and intro movie) work better with the amp. We learn a little more each show!

Everyone was beautifully well behaved – whether engrossed in colouring in a mask or sitting watching the movie and we had some lovely feedback. One parent, a first time visitor to @BillericayCine said he was really impressed with the environment; the relaxed, family nature of the cinema and the value for money. Another was very pleased that we have the cinema – on a cold day like today it was great to be able to take the kids out. Thank you for your feedback – it means a great deal to us.

And so we move on to our next movie – the 2015 version of Cinderella. Tickets are now on sale – and we’ve already had a large group booking from the Rainbows who we’re really looking forward to welcoming.