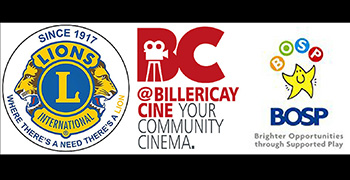 When we started Billericay Community Cinema we had the idea to use our shows to help publicise and showcase local community groups or charities, and in particular those who tended to get less exposure. So at each showing, a local charity or community group is given a stall in a prominent position and is able to chat to @BillericayCine guests and spread the word about what they do.

In addition, we highlight their presence in advance on social media and posters and on adverts on our huge 3.6 metre wide screen! We’ve had the Street Pastors, the Friends of Lake Meadows, the Billericay Historical Archive and in March we’ll be hosting Hamelin Trust.

In discussions with Jodie Connelly, their enthusiastic and dedicated Fundraising and Development Officer it became clear that there was the opportunity for us to go a bit further and to host a film especially for the children and young adults of BOSP and their families. Jodie was very keen – the Library environment with its dedicated showing would provide a safe environment where the BOSP families could relax, people could behave however they wanted and no one would worry in the slightest about the impact on others around them.

After further consideration, we realised that we could try put on the show entirely for free for the BOSP families. We contacted the Billericay Lions to ask if they would be amenable to funding the show. Not only were the Lions amenable but they were positively enthusiastic about the idea!

It took a little while to organise, but the morning of Sunday 28th February saw us showing “Paddington” to a group of excited children and young adults, accompanied by parents and carers.

Rather than us write about the day here’s what one of the parents had to say:

“Thank you for a super morning at the cinema to see ‘Paddington’.

We felt able to do a ‘normal’ activity, which can be so hard to achieve with a special needs child.

I took our daughter to see ‘Paddington’ on its first release at a local cinema. Due to her need to move, rock and shout out we left well before the end. Our exit was more the consideration of others rather than feeling my child had actually finished enjoying the film.

Sunday was a totally different experience.

Not only was our daughter able to see the whole picture, but she was able to do so in a relaxed and accepting environment. No one batted an eyelid at her quirky behaviours and we didn’t feel pressure to keep her quiet or still.

The warm and comfortable library surroundings gave her space to roam and a ‘time out’ area if she wished to look at books or do colouring.

The interval helped with a movement break and refreshment. As parents we took the opportunity to meet with others in a similar situation to ourselves. This is always helpful.

We would like to thank all involved with the organisation of this event.

My son just couldn’t believe how much popcorn he as allowed, thanks to the great generosity of the Lions. The cinema volunteers couldn’t have been more kind and caring towards our children.

And finally to BOSP. Thank you for changing my mind that a cinema trip really IS possible with a special needs child”.

Volunteers from Billericay Community Cinema, Billericay Lions, staff of BOSP and some of the BOSP children and young adults