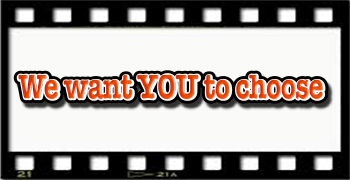 Initially, we chose them.

The advice we received from other Community Cinemas about starting up was that the organising Committee choose the first films. Once the cinema was established and the organising team had a bit more experience, involving the audience in the subsequent choices was highly recommended.

This approach took one organisational headache away from us, leaving time to focus on learning the myriad of other activities associated with setting up a cinema. And so, at our Committee meeting on August 10th, 2015 over a drink in the Red Lion we discussed a range of films.

But how do you go about choosing a programme of films ?

One thing our online and Library survey of 430 respondents had told us was that people had very wide ranging tastes and wanted to see many different types of films :  new and old, a range of genres from musicals to 1940s classics, from “cult” movies to niche, independent films. So our aim with our first few films was to appeal to a wide range of people in Billericay.

To be fair it was, with hindsight, pretty much guesswork ! We selected films that we “thought” would be popular. So far we’ve been lucky – Men in Black, Ghostbusters, Paddington and Slumdog Millionaire have all been popular choices. The classic It’s a Wonderful Life is looking very popular as is Elf – and we have high hopes for Casablanca, Annie and Hairspray. We’ve chosen films from 1946 to 2014, musicals, classic, and blockbusters from the past 30 years.

But we’ve also learnt much both from our experiences and from those of others : little hints such as identifying films which were going to have key anniversaries (if we had set up in time, for example, Back to the Future would have been ideal !) or tie in with special dates such as Halloween).

For our next half season we want the Community to be heavily involved in deciding which films we show.

This is one of the key features of a true “Community” Cinema. We’re trying to work out the best way of doing this. At each film show we have had a board where we ask our film goers to write the names of the movies they’d like to see. We’re also going to be finding other ways for people to let us know their favourite films – perhaps a survey in the Library, maybe an online poll, a competition on Facebook – so watch this space ! Your choice is very important to us – and by all means email us your suggestion (info@BillericayCine.com).

There is a real skill in putting together a successful, inclusive film programme

We’ve learnt that it can’t be done quickly, and it isn’t easy because we want to mix “popular” films with those that are more challenging; films that perhaps people haven’t seen before. We also want to reach a wide audience – and we can’t do that with just blockbusters.

So we’re building up a set of guidelines which include :

TWO) Over the year we must appeal to a wide cross-section of Community. This means that the 12 “Film Thursday” showings for adults must cover a wide range of genres designed to appeal to all ages and tastes

THREE) We’re happy to experiment. We don’t have to make the huge profits that the commercial cinemas need; we’re a Community Cinema that doesn’t have any shareholders or salaries – so niche films which appeal to a smaller sub-section of the Community are definitely possible.

FOUR) We do need to make enough profit to replace worn out equipment, cover annual costs such as insurance and to be able to invest for the future. Popular films must feature in the line up which will help subsidise others.

We need your help. Do email your suggestions to info@BillericayCine.com – or use the contact form below.